We didn’t end up having a “White Christmas” — instead it was 67 degrees — but I did get to see some snow and ice before I left town. Of course, now that I’m no longer there, the snow has hit hard and is staying (just my luck).

It had snowed a couple times before Christmas, but nothing stuck. So now that the snow is finally hanging around, I would say winter has finally arrived up north.

My friends, Laci and Dan, live on Lake Delta in Rome (as I stated in my Fall foliage on Lake Delta post). I had the opportunity to take some pictures after the storm hit Monday night into Tuesday morning, Dec. 28-29. Unfortunately the WordPress website isn’t allowing me to upload all the files at this time, so I picked a few photos from Christmas Eve and the storm and posted them below. The Christmas Eve photos were taken from my cousin’s house.There is nothing like fall and winter in Upstate!

It was a full moon and 60 degrees on Christmas Eve.

Ryan and I enjoying the warm weather and full moon on Christmas Eve.

My next adventure is to New Orleans (for the third time in the past year and a half)! The “Big Easy” is one of my favorite cities I’ve been to. I can’t wait to go back and experience all the fun. I hope to get some great weather photos while I’m there!

Winter will be here before we know it. Some states, like Nevada, have already felt the early onset of winter. I recommend reading this infographic by Jon Erdman on The Weather Channel’s website describing what a blizzard really is. There are a lot of facts on there that not even I, the weather enthusiast, knew about.

One example is that everyone has heard about “tornado alley”, but I had no idea there was a “blizzard alley”. The infographic states “A 2002 study by Dr. Robert Schwartz and Dr. Thomas Schmidlin compiled the number of blizzards from 1959-2000 over the U.S., finding a clear “blizzard alley” in the Dakotas and western Minnesota, extending into Iowa, Nebraska, southeast Wyoming and eastern Colorado.”

If you live in an area where snow is frequent, I definitely suggest reading the infographic and be aware of the snowy conditions around you when they come. It provides a lot of good information that every person living in a colder state should know. There are some major differences between a normal snow storm and a blizzard, and winter is coming up quickly, so be prepared by knowing the facts.

The bright side of winter being on its way… Thanksgiving (even though this is still technically the fall season), Christmas, and 2016 will be here SO soon!

Winter Storm Octavia did not back down yesterday into today. Fayetteville, where I live, got approximately .29 inches of solid ice (for more snow and ice total reports, click here). Check out some pictures I took below to get a better idea of how much ice we really had. It took almost an hour for me to clear off my car!

Another fact about Winter Storm Octavia is that this same exact day/weekend has brought winter weather to North Carolina for the past three straight years. The reason I know this is because my dog, Sable, passed away on February 16, 2013. It snowed here the day she died. Last year it snowed the same exact weekend. This year, yesterday and today, she has brought winter weather to us again. I truly think that is a sign she is looking out for me! I never get to experience this weather because I for some reason have bad luck with this – but she always makes it work the same weekend every year!

Unfortunately I did not blog about the first experience with this in 2013, but I do have a photo of the moment on my Instagram which you can see here. To read more about Sable and previous storms, click these links to go to my previous posts: Winter Storm Leon and Another Major Storm Hits the South… Winter Storm Pax!

I had to share this picture that my best friend, Sarah, sent me this morning. She lives in Rome, NY (where I’m from) and when she went got to work this morning she saw this! It was -8 degrees Fahrenheit with a “feels like” temperature of -25!

This winter has been pretty intense for most of the USA this year. The south eastern parts of the country have seen very cold temperatures and a couple of snow storms, which is not a normal winter for southerners. Living in North Carolina for a over a year has been quite interesting. I’m from Rome, NY, so when southerners get nervous about winter weather, I usually think it’s nothing to worry about… until Winter Storm Pax arrived. I can honestly say that Winter Storm Pax was a dangerous storm and even people from up North would say the same! From getting an inch of snow an hour to almost two inches of solid ice on the roads, this storm was epic to say the least.

It was definitely an epic storm for Jim Cantore.  I tweeted him a picture of the icy roads here in Fayetteville, NC and he replied! This obviously made my day. I was so excited! 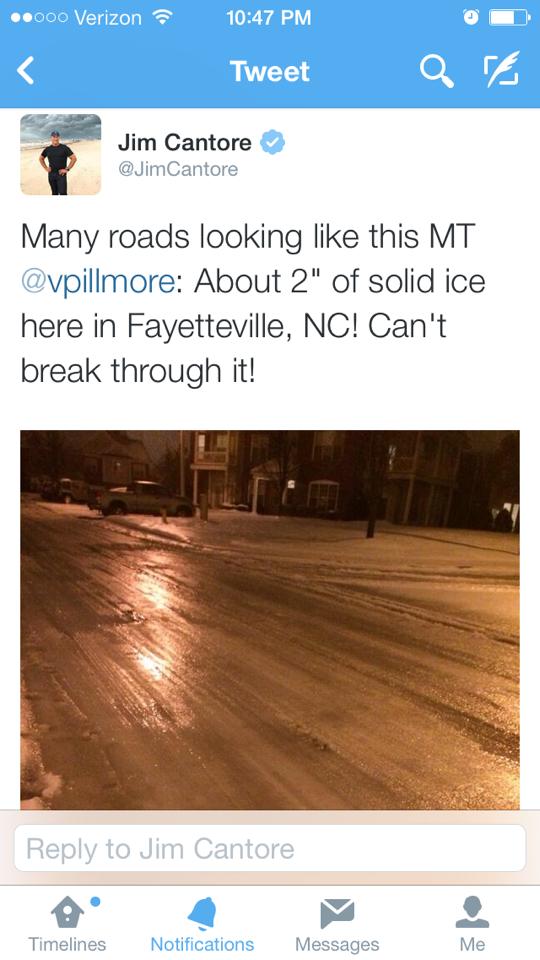 If you read my previous post about Winter Storm Leon occurring on the day before and day of Sable’s birthday, you will also want to know that Winter Storm Pax came around the time Sable had passed away. I think this is her way of saying everything will be okay! Also as I said before, I never get lucky to experience bad weather, and she is allowing me to do so!

Since I had two snow days in a row due to the weather, I had some time to capture some photos of the storm. Take a look below! You will also see my dogs, Toby and Scrappy, playing in the snow – Toby loves it as he is part husky, but Scrappy isn’t a fan of the cold!

Approximately two inches of solid ice on the road. I couldn’t even break through it!

Snow falling in my apartment complex.

Scrappy running in the snow.